The Corporate Affairs department of MSPS Greece designed and implemented the lightening of Zappeion Megaron from the 13th until the15th of November, with the international blue color of Diabetes to mark this year’s World Diabetes Day on behalf of the Hellenic Diabetes Association and the Friends of Zappeion Organization. The action was conducted with the kind support of the pharmaceutical company Novartis Hellas.

As part of the many activities implemented for the celebration of World Diabetes Day, a press conference took place along with the official lightening ceremony in the presence of representatives of the political leadership, health agencies as well as citizens.

The official opening ceremony was inaugurated by the Greek Deputy Minister of Health, Mr. Marios Salmas. 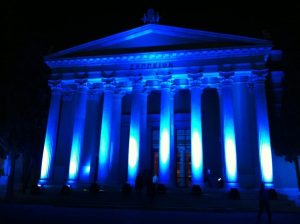 13 awards won by MSPS at the