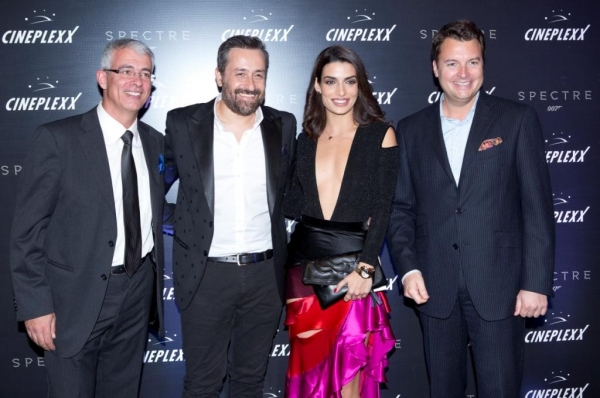 MSPS Greece organized the Grand Opening Event of the new CINEPLEXX movie theatres at One Salonica Outlet Mall, with the exclusive in Northern Greece premiere of the new 007 James Bond movie “Spectre”.
More than 800 distinguished guests from a large spectre of the Greek society, especially from Thessaloniki, attended the official opening Monday 9th November of the new, entirely renovated CINEPLEXX. The inauguration was presented by the Minister of Macedonia and Thrace, Mrs Kollia-Tsaroucha, herself a regular cinema-goer. “This was a truly fascinating experience”, she said after the screening and thanked the investors for their “decisiveness to bring their business to Greece”.
“It is well known that Thessaloniki loves the cinema, and I hope that this fine venue here tonight, Cineplexx, will offer a much needed economic breathe to the city, enhancing its culture and leisure life”, Tsaroucha added, emphasising that “in these difficult times, it is always good to remember that besides what we call reality, there is always the need for fairy tales, many of which are offered by the cinema”.
“We are here to stay, but also to develop further in the country”, came the reply from Mr. Christof Papousek, the Managing Partner and Co-owner of the Austrian company Cineplexx International GmbH.
“I am convinced”, he added, “that we made the right decision investing in Greece, and I am optimistic that the people of Thessaloniki, who we know how much they love cinema, will embrace this new venue and appreciate the quality of this project at all levels”. Mr. Papousek, added: “Sometimes people want to escape from their problems and difficult thoughts. They need some free time, and cinema is a much affordable solution”
The Mayor of Thessaloniki, Mr. Yiannis Boutaris, was also present at the inauguration ceremony. He also underlined “how important, psychologically and businesswise as well this project is for the city, its people and also for its investors”. When asked by the Press if he, as a businessman foremost, really believes that this investment is worthwhile, he answered “I’m sure the company executives have very specific and clear targets and, before making their final decision, did their research and concluded that, yes, it is worthwile expanding their business in Greece. They know better”.
The event was presented by the actress Tonia Sotiropoulou, who had a role in the previous, 23d James Bond Film “Skyfall”. Before and after the screening of the new film, Spectre, producer and famous DJ Themis Georgantas, created a great musical 007 party atmosphere.
Guests also applauded the local all-girls Electrical String Ensemble “Fortissimo” with their dynamic interpretation of some of the most well-known signature music pieces from previous Bond films.
At the One Salonica Discount Mall, the company renovated 8 movie theaters. All guests were impressed with the whole venue, the advanced screen technology, and the whole logistics concerning the ticketing and catering of the customers. Already, many of the guests at Monday’s opening ceremony, are referring to “the CINEPLEXX place”.