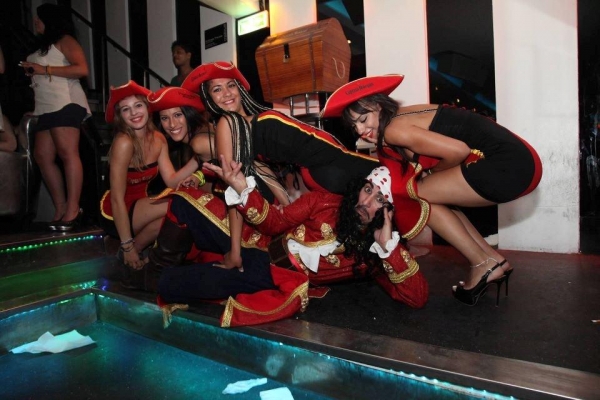 Captain Morgan is Back to Cyprus !!!

All eyes were turned to the Captain Morgans  red jeep,  which was seen again on the streets of Nicosia, Paphos, Larnaca and Ayia Napa.
For 8 days, the team of Captain Morgan, visited different clubs and bars throughout Cyprus to entertain but also to offer the world’s favorite drink of Captain,Rum  and gifts  . The program was successfully developed in the last 8-day of June, under the supervision of MSPS Cyprus.
The program promoting Captain Morgan ‘Keys to Adventure’ (KTA) is conducted for the second time in Cyprus, after last year’s success.

The Captain Morgan is actually a well trained actor, whose actions are determined from a training manual and rules that promote responsible drinking. The ‘Captain’ trained alongside a Cypriot actor that will be the Captain for the  other promotions that will take action soon.

The four  Margonettes(Assistant sof  Captain)  , were collaborators of MSPS Cyprus with talent in dance, and full of energy to party.